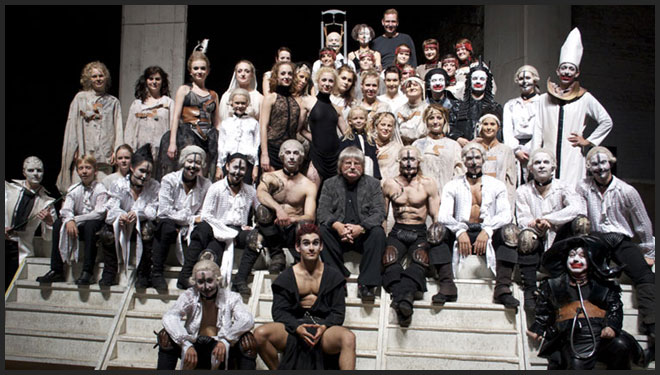 Founding of the compagnie

The founding of the company was occasioned by an invitation to represent the Federal Republic of Germany as official cultural contribution at the Summer Olympic Games in Atlanta in 1996. The works presented were "On the Puppet Theatre" and "Clown of God".

The ensemble of dancers, puppet players, actors, and singers represent a diversity of genres and this is the artistic principle of the company. The ensemble and their brilliant craftsmanship offer a visual 'Gesamtkunstwerk', a total work of art, and a festival of the senses. The ensemble draws on contemporary theatre forms, Cirque Nouveau, acrobatics, and pantomime; all the methods and means of poetic and expressive physical art, all executed with virtuosity.

The creative and conceptual center of the ensemble, as well as its male lead, is Gregor Seyffert, named as World's Best Dancer of the Year in 1997, appointed as Berlin Dancer-Laureate, and former First Soloist of the Komische Oper Berlin. Seyffert's shapes the features of the company with his unmistakable presentation of character roles and his unique radiance.

Gregor Seyffert defines its ensemble work as a permanent development, an exploration and extension of the limits of theatre. The most different stylistic influences and handwritings sharpen the profile of the company. The foundation for this process is the creative work of Gregor Seyffert, as director, dramatic advisor, choreographer, and, of course, as dancer. Equally important is the winning of internationally recognized personalities, who are engaged as guests for the development of productions.

The structures of the company are comparable to a theatre. The pillars are independent, flexible projects with changing choreographers and directors. These visiting artists work with permanently employed advisors and staff within a central production and communications workshop. Ensemble size varies between 10 and 20 members.

This institutional self-responsibility of the Compagnie is the starting point for continuous cooperation with the external organizers, festivals, and production venues who contribute to securing the financial basis.

The emphasis of the work of Gregor Seyffert & Compagnie will be in Berlin for the next five years. There are, of course, a series of artist-in-residences, a wide range of collaborative offers, and a large number of solo performances for other companies and theatres, all based on Gregor Seyffert's world-wide renown as a recognized dance personality.