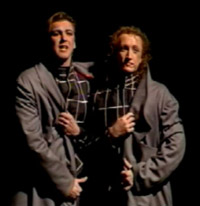 The only dance piece by Bertolt Brecht is actually a mixture of dance, cantatas, and short operatic compositions that transform the Seven Deadly Sins of Christian tradition into bourgeois virtues. The linking of social rise with moral decline is made clear through seven images portraying the adaptability, the lack of principles, the susceptibility to seduction, and the strengths and weaknesses of the family daughter, Anna. Anna I and Anna II are played by two persons.

It often occurs in Asian theatre, and it was the case in Shakespeare's time, that women's roles were portrayed by men, and I find this particularly interesting.

This is the basis for the artificiality, the estrangement, and the exorbitance of the actors. Weill must have considered that the role of the mother would be sung by a bass. It is very rewarding to push this concept further in gesture, movement, and singing, and to transform it into dramatic portrayal.

Cantata for soprano, solo-violin and orchestra (1925)
Duration of performance: 20 minutes